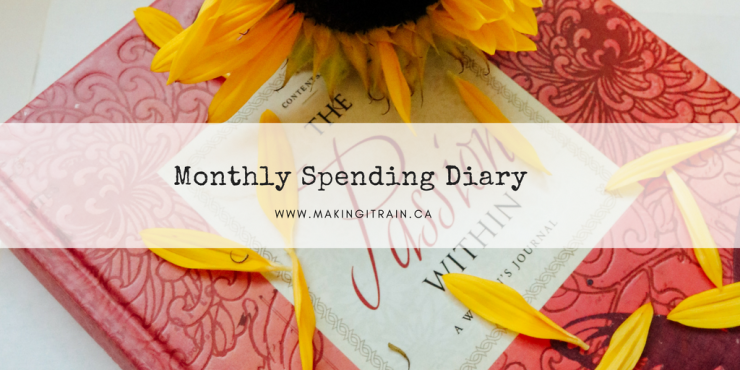 We are officially one-quarter of the way through 2018! What a beautiful time to check in with my latest monthly spending diary. The gist behind these spending diaries is that, after tracking my spending for all of 2017, I realized that I still was not being very intentional about my spending. Basically, I would make sure I was in the black every month but I had no idea how much I was spending on household items or food or clothing or entertaining.

Let me start by saying – I think the “spend less than you earn” method can be awesome! I paid off debt and I saved a lot in 2017. I didn’t have to pay too much attention to individual budget categories and that made managing my money way easier. But as I scale up my goals, I keep looking for new ways to pare back any spending that does not really align with what I want.

In 2018, a major personal goal was to break down my monthly spending and share it on the blog. I also share the amounts that I am directing to my student loan repayment, retirement savings, emergency fund, and other savings goals.

Note that March was a 3-paycheque month and I also had a nice side hustle cheque come in, so I had a lot of extra income this month to play around with. Here are my numbers for savings and debt repayment this month:

This month, I contributed just shy of $2000 to my debt and savings goals, and it feels awesome! It might seem a little odd that, with all the extra money coming in March, I only made a $400 payment toward my student loans. I have been paying my student debt off super aggressively, but I have scaled back for now for reasons I discussed in my last post. Basically, I’ve got a lot of life craziness – like a big move – possibly on the horizon and I want to have as much cash on hand as possible.

Now for my March spending:

March was a really high spending month. I usually spend less than $3,000 and I broke $3,500 this month. I am okay with this because for the most part, this spending aligns with what I most value. So let’s dig in:

Travel: I spent $430 on travel and you know what? That makes me happy. I get to fly to California in a week and visit one of my best friends. I also got to start replenishing my near empty travel fund.

Entertainment: Entertainment was really high this month too. I don’t usually spend too much on bar covers, etc. but there was a lot of that this month.

April may continue with this trend since I am traveling on three consecutive weekends, but I am guessing these numbers will settle down in May when all the free summer activities will be in full swing.

Food: Since food is one of my biggest variable spending categories (seriously, it’s almost 20% of my regular income on some months), I like breaking this one down a bit more closely. It has been really helpful for me to track this category and see what works, or doesn’t work, to reduce my food spending. So this month, here is a more detailed breakdown:

I don’t love this number, but I am okay with it because my restaurant spending was more in check as a result. I  decided to look back at my 2017 grocery expenditures and whoa – I had four months that were over $350, so even staying under that is a win for me.

I still go grocery shopping almost every other day, but I have decided that I am also okay with that. I hate food waste and being able to go grab fresh produce or one or two items to make a specific dish every couple days makes sure that I waste almost nothing.

I probably do grab a couple more things than I need when I pop into the store, but I am okay with that trade-off if it means I don’t end up tossing out perfectly good food.

Some ways that I have been successful: building in one or two big shops per month at a big cheaper grocery store outside of downtown. This requires a drive but allows me to stockpile huge amounts of frozen veggies, quinoa, pasta, lentils, etc. for way cheaper than I can find them downtown.

Another big win has been making sure I grab a couple frozen pizzas when I go grocery shopping. This saved me from ordering in at least a couple times in the month of March. A $4 frozen pizza can feed me twice, and has probably rescued me from at least a $20 takeout bill on more than one occasion. Especially with the amount of traveling I do, it is so great to get home from a road trip or the airport and know I have one of these I can just stick in the oven.

There were no huge restaurant bills this month, which was great and helped to keep this overall number lower. I went out several times a week in March but often ate at home before I met up with friends or would only order an appetizer. I kept dates simple, and we usually just went for dessert or coffee.

On days where I knew I would be traveling or unable to pack a lunch, I planned ahead by figuring out where I could grab a $5 sandwich. By implementing these small strategies, my restaurant total was actually significantly lower – about $85 less – than it was last month.

Rather than drastically limiting my outings, I think trying to find small ways to cut down when going out is way more reasonable for my lifestyle right now.

Do you have any other advice on how to keep those restaurant, grocery, and entertainment bills down while still leading a pretty packed social life? Let me know in the comments!