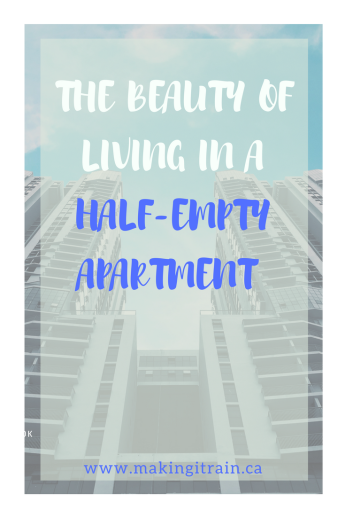 I recently sat down and did the math of my hyper-mobile adult life. In the last twelve years, I have lived:

That adds up to a LOT of moving. Too much, you might argue! But there are a lot of things you learn when you have to pack up your entire life and move it – across a city, across a province or state, or across an ocean.

Some of those lessons are pragmatic, like: moving is very expensive.

Other lessons are tied to the emotional rollercoaster of moving and the barrage of thoughts, feelings, and questions it can dredge up. Some of my deepest reflections in this time have been on the nature of consumption and the significance of objects in our lives. And after fifteen moves in twelve years, minimalism and mindfulness are concepts that have started to resonate with me more and more with each move.

In December 2016, I took a big step and signed a one-year lease. I moved into a new apartment in February 2017.

For the first time ever, I had a plan for this move. I wanted to move into my new home with my essential day-to-day items, some basic furniture, and nothing else – with no immediate plans to fill the void.

When I vacated my old apartment at the end of January 2017, I did not have…well, much of anything. I had moved to this city specifically for graduate school and with my nomadic lifestyle, I had no idea how long I would be living here. I bought a load of things when I first arrived, only to sell it all about eight months later when I had to go abroad again. So for the remainder of graduate school, I scoured the Internet for furnished apartment listings so I would not have to buy much.

So when I signed my new lease, I did not own a bed. Or a couch. Or a kitchen table, or plates, or appliances, for that matter. I work from home fairly extensively, but I did not even own a desk. I did not own more than a single towel.

I could give you a laundry list of the many things I did not own when I moved.

But to save  time, I can tell you what I DID have in my possession when I moved:

My new apartment was unfurnished so it would definitely require some initial investment (read: a bed and a couch) but with this list of items I already owned, there was not much I felt an urgent need to buy. Sure, I immediately went to IKEA and bought two sets of cutlery. My mom had a box of old dishes she wanted to get rid of, and I took them off her hands. But beyond that, there was not really much of anything that I needed.

And as I sat in my new and pretty empty home those first few days, I wanted to cherish every moment. I felt free sitting in this empty space that was all mine and I felt liberated that it was not full of stuff.

With that in mind, I reaffirmed my decision that I did not want to proceed with filling it with things. I could make a cup of coffee in the morning. I could hang my work clothes, iron them, and easily get dressed for work. I could sit in my computer chair and read a book. I could sleep in a comfortable bed at night. I could do really everything I needed to do.

With the exception of a bed and a couch, I purchased nothing. No coffee table. No desk. No end tables or kitchen island. No TV stand or TV.

The smaller stuff was a no-no, too. No microwave. No Tupperware or pots or curtains.

To live in my home and figure out as time went on what I actually missed having. It was a beautiful opportunity to re-evaluate my wants and my needs. What did I need to live comfortably, and what did I want to make my place more of a home?

In taking this approach, I was able to fill my new home with a lot more intention and a lot less stuff.

Some things clicked right away. After less than a week, I broke down and took a trip to Value Village and another to IKEA. I stocked up on the likes of water glasses, a bath mat, and hooks to hang things up on my walls and bathroom door. I also bought a little folding table to plunk down my computer, making it easier to get work done at home.

My mom gave me a TV that had been stored in her basement for some time. It lived on a Rubbermaid bin for months. I never really minded that setup, but eventually I inherited a TV stand from a friend when she moved.

It took me well over a month before I bought curtains.

Slowly, I acquired almost all free pieces of furniture. I managed to find a bookshelf, a bedside table, a microwave, and a little kitchen bar – free. The only reason this happened was because I wasn’t in any big rush to acquire these items.

By the summer months, I had bought an IKEA lounge chair & ottoman off a friend for $25 , and my small entertaining space was completely transformed. My mattress and box spring lived on the floor for many months. Just a couple months ago, I invested in a metal bedframe, and I love my bed so much more now.

Filling my home was a slow and meaningful process. This February marks the one year milestone in my home (this is a kind of a big deal for me!) and I love that it took me the entire year to build and shape the space that I now love.

Is my space cluttered now? Yes, a little. Do I have too many things? Sure. As I willingly took hand-me-downs from friends, I also accepted things I knew deep down that I would probably never use. Like an espresso machine that lived on a side table for months. I never even plugged it in, let alone made espresso, and later gave it away.

But making the conscious decision to live in a half-empty apartment for a while and only take on things I truly loved and needed still dramatically slowed down the intake of items. Sure, the espresso machine slipped through the cracks, but many other things didn’t. Every time I was in an IKEA or a Wal-Mart and I was tempted to just grab something “I needed” for the kitchen, I thought twice. And I almost always left the store empty-handed. Because of this:

I now have the appropriate amount of furniture and personal items for a studio apartment.

I have invested in items that I genuinely missed having every day.

I have built a space that is not overtaken by trinkets and objects.

I don’t lose things as often and I can find everything in my space.

I have not fallen into the mindless consumption craze that can take over when you move.

I do not feel tied down by my home or my belongings because I have made such careful decisions.

All of this because I lived in a half-empty apartment for months…and I am so glad I did.